Have you ever noticed the color of the walls at work? If the walls in your office aren’t white, they’re probably gray. Unfortunately, according to FastCompany, you should never paint your office walls white. It might seem clean, fresh, and crisp, but doesn’t it also remind you of a hospital? Too sterile and bland for a workplace. No one wants to go to work and feel like they’re in a doctor’s office. This University of Texas study says that workers are more unproductive in offices with white walls than offices of any other colors. Gray, beige, and white offices even induce negative feelings like sadness and depression, particularly in women.

Companies like Google don’t have to worry about resources while they conduct A/B tests on what colors make their employees most productive. They can repaint their rooms hundreds of times until they get the most effective shade. Most of us, on the other hand, don’t have that luxury — so what color should you paint your office?

Now this is a bold, vibrant color. A high-wavelength color, red gets the blood flowing and increases the heart rate. Not surprisingly, you often see this color when shopping, probably in a store window for clearances or final sales. It ups the energy and gives a sense of urgency in a workplace setting, perfect for boosting brain activity. But hey, you might want to be careful — red can be too stimulating for some, especially if you’re prone to getting overly-worked up or emotional. It’s best used in accents or in small doses.

It’s also helpful when you want to call

attention to something. Hubspot did an experiment where they created two identical home pages, the only difference being that one had a green button, and the other a red button. The test was meant to see whether or not the color of the button actually made a difference in the number of clicks they got. Guess what happened? Well, the red one outperformed the green one by 21%. You’d think the green one would do better, right? After all, for traffic lights, green means go and red means stop.

Blue is the complete opposite of red. It’s soothing, calming, and relaxing — think the ocean or the sky. That’s probably why Mark Zuckerberg decided to make the color of Facebook blue. Oops! That’s not actually why.  It turns out, it’s because Zuckerberg is red-green colorblind and blue is the richest color he can see. But aside from Facebook, there are plenty of examples of blue being beneficial to productivity in the workplace (Twitter, LinkedIn, Pandora, the list goes on).

Blue stimulates the mind. Stronger shades help clear your thoughts while soft blues aid concentration. In business, blue connotes a sense of reliability and trustworthiness, as well as confidence. It’s also the most universally favored color – 29% of people say that blue is their favorite color. So if you need to keep your employees focused but relaxed, you can’t go wrong with blue.

One of the most energetic and optimistic colors,

yellow is bright and youthful. Maybe it has to do with the fact that it’s the color of sunshine, but yellow typically connotes happiness and excitement. It’s known to help stimulate creativity and innovation, perfect for designers or artists. For the rest of us though, some yellow tones can be a little too bright to look at all day. People in yellow rooms are more prone to losing their temper, and babies cry more often and for longer periods. Imagine constantly being surrounded by bright yellow walls — it wouldn’t be hard to go crazy after some time! 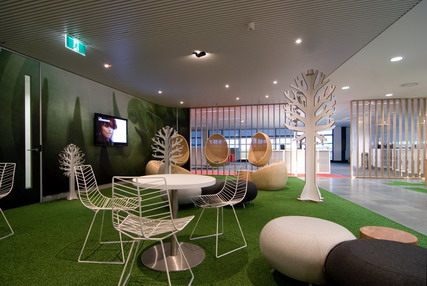 do you think of when you see green? You probably think trees, grass, or something to
do with the outdoors. Green reminds us of nature, life, health, freshness, and serenity. It’s the easiest color for our eyes to process – meaning that it doesn’t cause eye fatigue. This makes it perfect for people that work long hours. It’s relaxing but at the same time, helps maintain focus. Research shows that green is primarily associated with nature and elicits positive feelings such as relaxation and calmness.

Whatever the color, just make sure that it matches your brand and your culture. Brighter colors are more stimulating, and subdued colors more relaxing. Keep in mind that these colors are only meant to be a boost in the right direction, and not a complete do or die sort of thing. Your employees won’t suddenly start or stop producing results just because the red you were trying to paint turned out to be too orange. Besides, wall colors are easy enough to change up. So do something new and try a different wall color every once in a while!