5:27 AM. A busy CEO rolls over, glancing at his phone before his morning run. 513 unread emails. “Q4 numbers – URGENT,” “Focus group study results in – new shirts underperforming” read just two of the first ones he glanced at. With only 24 hours in a day (and really, you need to sleep at least 7 of those, please listen to your mother), leadership often has too many things to worry about to spend a moment on the culture they’re creating in their company.

In theory, yes, it’s important to make those “Top 50 Best Places to Work” lists. It’s important to organize team happy hours, and to allow dogs in your office, and to have the coolest vacation policies and best interview processes. But when you’re prioritizing your precious little time, why would you focus on culture building instead of building up your new product line?

Glassdoor recently compared the returns of companies with great culture against a benchmark, to see if investments in people could be tied to tangible returns. Could it perhaps impact bottom line? According to the results, there is a strong correlation between companies with very high employee satisfaction – winners of Glassdoor’s “Best Places to Work” award – and stocks that generate consistent returns above the S&P 500.

Glassdoor explains, “With each portfolio, we imagined we had $1,000 to invest in each, and we compare[d] their stock performance to the overall market since 2009, the first year the awards were issued.”

The question was, do the hours a CEO spends on culture pay off on the bottom line? The answer, it seems, is that there is a correlation between between stock returns and employee satisfaction. Over the past six years, according to the Glassdoor study, those stocks on the Best Places to Work list outperformed the S&P 500 no matter how you cut the data. 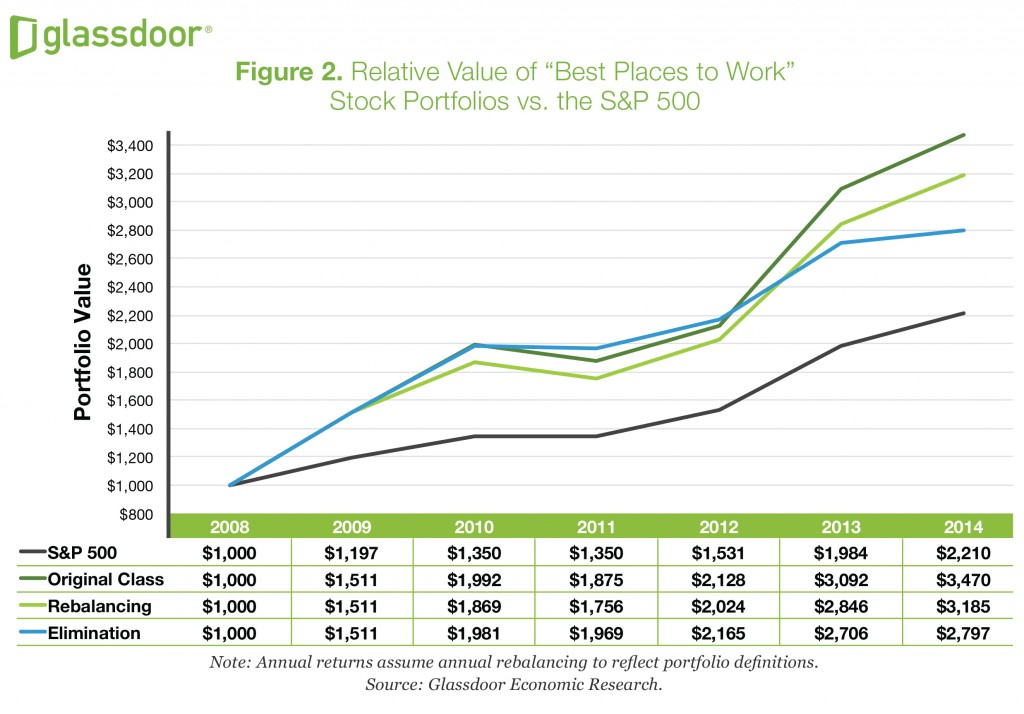 On the flip side, the opposite holds true. Glassdoor also examined a portfolio of 30 companies with the lowest employee satisfaction, and found that those companies significantly under-performed against the S&P 500 since 2009.

There are a lot of extraneous data points that could have caused the outperformance of the “Best Places to Work” stocks, of course. Number one on this year’s list was Google — no one believes they’re having trouble attracting and retaining the best talent, or that their behemoth returns are chiefly a result of a focus on their talent pool.

Andrew Chamberlain, Glassdoor’s chief economist, noted, “It could be that fast-growing companies have enough cash on hand to make it easy to attract and retain good, satisfied employees. Or, poorly performing companies could put benefits and perks on the chopping block quickly, which could hurt employee morale. It’s also possible that building a more satisfied workforce in itself leads to better results.”1

No matter the driver, that CEO can be sure as he laces up his shoes for his morning run and glances at his phone, that email with the subject line “Employee survey results summary” should definitely make the top 5 reads list. As Glassdoor notes, “Employee satisfaction is a strong predictor of long-term company performance. That fact alone should raise eyebrows both for investors and CEOs looking for an edge in today’s marketplace.”

How can you grab that advantage at your company? According to the Best Places to Work guide, there are a ton of ways to win over employees, starting with an intense commitment to hiring and maintaining the best people. Having awesome perks and benefits is one way to keep those people in your company. Of the top ten companies on Glassdoor’s 2015 list, five list great benefits as one of the top reasons to choose the company.

It might be hard to convince yourself that a 5:27 AM wake up time is worth it, or that the newest marketing numbers really indicate a rebound of that terrible PR moment last month, but you shouldn’t think twice about investing in your employees. Showing each member of your company that you care – that you have their back – will pay dividends far beyond good karma. You’ll see it on the balance sheet.

Here at Aspire, we know that workplace perks and culture are not one in the same, but perks can be an awesome piece of the cultural puzzle. Maybe most importantly, perks are a piece that you have control over. Interested in learning more about building innovative perks and benefits packages? Or how companies that aren’t Google can offer meaningful perks without breaking the bank? Join Aspire Co-Founder and COO, Lily Cua, for a webinar about perk best practices and common pitfalls on March 26th at 12:30 PM! Hoya alums can register here. Those of you who had the privilege of attending another university, receive a recording of the webinar in a week!